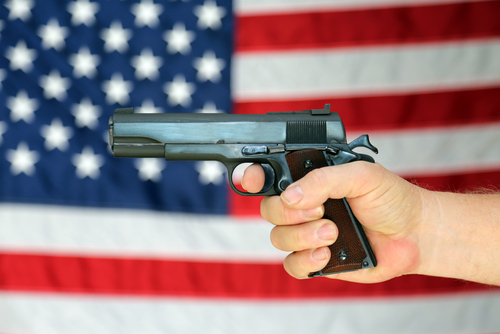 I HATE MY GUN.

I have a gun. One day I did a “if you could only own one gun” search on Google, and then I think I went out and bought a Glock 19. I can’t remember for sure though—I’ve never used it. If all goes well, I’ll hopefully never need to either… because I hate it.

Needless to say, I am not a gun enthusiast. I don’t keep it in a place that would be handy in case someone ever broke into my house… and I don’t practice shooting it for sport. Although I’ve only been out to a gun range once in my life, I was definitely able to see how some people might enjoy firing off weapons for fun. But that’s not why I have one. The reason I bought a gun was strictly for apocalyptic scenarios only. And for anyone that thinks that sounds crazy, I would have to agree. The entire gun culture in America, IS crazy.

As Americans, we have been conditioned to believe that the end is somehow near. And I believe it goes beyond the countless movies, books, and television shows that covey an assortment of apocalyptic plots and end of times scenarios. It is something that goes deeper…something I think many of us feel on an almost cellular level. Regardless of whether we believe it will come through some kind of political, religious, environmental, or meteorological event, there is no denying that there are millions of people out there who are getting ready for something. And even if that may seem ridiculous to some of us, there are plenty of good reasons to realize it really isn’t a joke at all.

America is no longer the dominant global power it once was. The US portion of the global GDP is nearly half of what it used to be, and many of the job industries that used to contribute to it have dried up. Add to that a public education system that is not even remotely competitive with other developing nations, and it becomes hard to see how we will remain competitive in the future. Our military is now spread out so thin, that it has become virtually impossible for us to retain a presence in many of the areas where we used to wield substantial influence—and our spending to debt ratios are beginning to exceed any long term sustainable levels. Many of us can sense that our best days are behind us, but unfortunately there are few reasons to believe this trend can be easily reversed. This leaves all of us asking ourselves what will happen when the U.S. finally collapses as a global superpower? If things continue at their current rate, this will almost surely happen some time in the next 15 years. What then?

The idea that America can slip into an economic ruin, reminiscent of the fall of the Soviet Union, is of course not even the worse case scenario. Many experts believe we are closer to nuclear armageddon than we’ve ever been at any other time in history. Even if a nuclear war didn’t physically hit the homeland, the repercussions would still be enormous… the kinds of things most of us don’t even want to imagine. But whether we want to imagine them or not, doesn’t change the fact the threats out there are very real. Unless some kind of paradigm shift happens within our collective consciousness, there is little doubt bad stuff is coming… That leaves only one question. How do we prepare for it?

For a number of us, the answer is simple. We buy guns.

Now even though most gun owners can probably give you dozens of different reasons for why they own guns, aside from hunting, there is really only one reason. Because we are afraid. That is not a judgmental statement, and it certainly is not intended to insinuate that gun owners can not be “tough”. Most of us have families, and children, and people who are counting on us to keep them safe. It is human nature to want to protect the ones we love. What is crazy, is to believe that by arming ourselves to the teeth, we can protect ourselves from all unknowns. This is the difference between rational thought, and irrational thought—and currently America is in the depths of a deep psychosis.

We are obsessed with guns. We have become so deeply entrenched in the culture of guns that even after the largest mass shooting in American history, we still can not bring ourselves to question the very fabric of this social psychosis. We have become conditioned to not only expect these things are going to happen, but that they will continue to happen. The acceptance of this kind of insanity only makes us more insane. And the worst part of it is: when I hear about the destructive power that one rifle can have, like an AR15 with a bump stock, I can’t help but ask myself…. should I have one of those too?

Is this what we have been reduced to? The belief that the “he” who has the most firepower will be the last man standing? This kind of thinking goes far beyond an issue within American society, it is essentially our stance globally as well. The problem with this kind of mentality is that no one can ever really win. As much as I’d like to believe we could all disarm, and live peacefully amongst our fellow countrymen, I know this is not possible when our entire political structure is derived from maintaining a position of strength. Are we so far gone into this zero sum game, that there is no longer a realistic way out?

I am not naive. I know the world is a dangerous place. But I don’t want to continuously have to live in fear. The world is too small, and too interconnected for us to think we can go on like this forever. What is it going to take for humanity to realize we need to wake up? To start thinking about what it not only means to survive, but to prosper? It is time to at least start having the right conversations. We have the resources, and the tools… the question is do we have the will?

I don’t know the answer. Logistics are complicated, but truths are simple. We evolve, or we die…