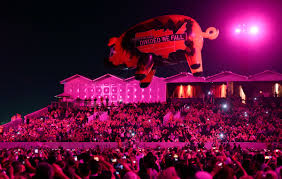 POLITICS IN THE ARTS.

Today people are protesting against Roger Waters upcoming performance in, of all places, New York. The root of these protests seem to stem from Roger’s use of a star of David on an inflatable pig (which according to Roger’s publicist, will not be used for any of the New York shows). Although I have no interest in delving into the politics of Israel in this column, nor the specific debate that could be had about the what the star of David as a symbol represents, I would like to address the larger issue of the role of politics in the arts.

I would like to start by saying that I recently had the pleasure of seeing Roger Waters perform in Nashville, TN. (And despite the fact that Nashville has a much smaller Jewish population than New York, I didn’t see any stars on the inflatable pig there, either). While I personally don’t believe Roger Waters intentions (the times he has used the star) were ever meant to be perceived as anti-Semitic, there was no denying how he feels about a host of other issues. Specifically, Donald Trump. During his rendition of “Pigs”, from the 1977 album “Animals”, an image of Trump was plastered across a gigantic screen with the word “charade” underneath, leaving little room for debate about the point he was trying to make.

Although there was a good deal of coverage before the show detailing some of the imagery used during his performances, there were still inevitably a bunch of people who seemed offended. After showing an image of Trump with a micro-penis, I noticed a few people decided to leave the show altogether. It is true that Tennessee is one of the redder states in the nation, but for the people who found themselves shocked and appalled… I couldn’t help but wonder what they’d been expecting? Had they really considered themselves fans enough to buy tickets, without ever really listening to the lyrics? Pink Floyd had been political for the majority of their career—surely these people knew they were not attending a Kenny Chesney concert…

Politics in the arts goes back nearly as far as when people first started creating it. The history of literature, design, and music is not only filled with political statements, but oftentimes is responsible for some of the most important work ever created. Shelley once said that poets were the unacknowledged legislators of the world. Let us not forget, regardless of what side of the political spectrum you may find yourself, that art is, and has always been about expression. If the artists of the world can’t continue to put their personal views into their work, whatever that may be, we will be left only with the views afforded to us by the politicians… and I can’t even think of a scarier world to live in than that.