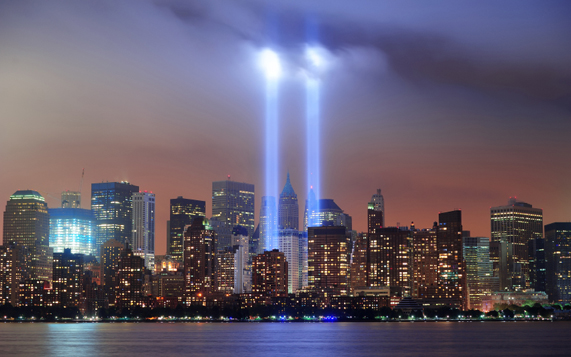 SIXTEEN YEARS SINCE WE LOST OUR MINDS.

After the Berlin Wall fell at the tail end of 1989, we were led to believe that we had somehow won… that the United States had “conquered” the world. We believed that “Western” ideology had prevailed, and that somehow, the rest of the world would inevitably fall in line. Through the Reagan years, we had been conditioned to believe that everything fell simply into two categories. That which was “right” and “good”, and that which was “wrong” and “evil”. Despite being an overly simplified view, when the Cold War ended, we inevitably took it as a confirmation that America was good, and therefore would prevail.

The 1990’s were a good decade for America. Aside from the Gulf War, the decade was for the most part a time of peace and prosperity. The economy was strong, and the GDP increased on a continuous basis for almost ten years. New technology was developing at an astounding rate, and the dawn of the internet seemed to be a magic new tool that could somehow be used to help bring everyone into the fold. People were opening up about their “feelings” in ways that had never been expressed before. The voices of minorities who had normally been marginalized by “White America” were establishing their own forms of self expression (through the media, politics, and the arts) in ways that they had never been able to before. Of course there were still problems, but overall things were looking up…

Apparently we were not as loved by everyone as we had been led to believe. Sure, “they” had tried to blow up the WTC once before in 1993, but that time didn’t really count—not only because the buildings were left standing, but because WE were still standing.

But something happened on 9/11 that changed all of that. For the first time in our lives, we were forced to examine what the American Dream really meant. Not only what it meant to us, but what it meant to the rest of the world as well. All of a sudden we had to think about how our dominance as an economic and military superpower had been impacting people in far away places. People that were normally not ever seen or heard from… and that was scary stuff to have to face.

Suddenly we felt exposed. In a matter of minutes we realized we were vulnerable in a way that most of us had never considered. And inevitably, we had to make a decision… In order to move forward, we had to decide what our priorities were, and ultimately what it meant to be an American.

Somewhere along the line, after the initial period of being united by a single cause/tragedy began to wear off, we had to examine our own identities. Sadly, we started to realize that what it meant to be an American, meant completely different things to different people. Our divisions as a nation became exposed, and the cracks started to show.

Now, sixteen years later to the day, we have to face the reality of our divisions as a nation on a daily basis. Rarely can we get through the day anymore without some situation arising that forces us to identify ourselves as either one of “us”, or one of “them”.
I don’t have the answers… I don’t think any of us do. But there are a few questions that I think we can start to ask ourselves that might help us move forward and figure it out. Because at the root of it all, September 11th didn’t happen because we represented any specific race, creed, color, or ideology. It happened while somehow managing to represent all of them. Let us remember 9/11 for being the day that forced us to examine our identities as Americans, and the event that forced us to work through our differences. This will be remembered as the ultimate challenge America had to face in the 21st century, and there will be little hope for the rest of the planet if we fail. The world is watching, lets figure out a way to pull it all together before it’s too late.